Listen
You are here: Home › Stories › Doctor of many talents

Doctor of many talents

Dr Dinesh Palipana OAM works at the Gold Coast University Hospital in one of the busiest emergency departments in the country, and he loves his job.

On any given day he could be treating someone who’s having a stroke or a heart attack, or treating a kid who’s fallen off a bike and broken their arm.

Dinesh acquired a spinal cord injury in a car accident in 2010, when he was just 24. Completing his medical degree at the time, Dinesh returned to study after a long period in hospital and then rehabilitation. His spinal cord injury affects his fingers and everything below his chest.

Dinesh started working as a doctor in 2017, and was named Junior Doctor of the Year at the Gold Coast University Hospital in 2018.

His emergency department colleagues have been supportive, and he has had wonderful interactions with his patients.

“My patients have been amazing,” Dinesh says.

“Every single one of them has been so positive and supportive and we’ve had amazing journeys together, when they’re going through such a hard time.”

Dinesh is the first quadriplegic doctor to graduate from medical school in Queensland and the second in Australia.

While he’s paving the way for future doctors and healthcare workers, it hasn’t always been easy. Dinesh thinks it’s because when it comes to disability, society takes a deficit based approach, looking at what people can’t do, rather than seeing the skills and abilities people with disability have.

“Even before I had the injury myself, I had no idea what it involved to be someone with spinal cord injury,” Dinesh says.

Now he’s a strong advocate for medical students and medical workers with disability, and wants to see better supports for them, as well as better education around disability in medical school.

Dinesh cofounded Doctors with Disabilities Australia with Dr Harry Eeman and Dr Hannah Jackson – who are also people with disability.

The organisation advocates for people with disability working in the medical and healthcare profession.

“About four or five years ago, the three of us found a lot of policy barriers for medical students with disabilities,” Dinesh says.

“The body that provides policy guidance to medical schools is starting to do that now as well.”

“In such a short period of time it’s come through a fair, fair amount of change. When we saw that we wanted to do something about it, we founded this organisation, started advocating and we’ve made progress.”

“If we see some injustice in the world, or something worth fighting for, we need to speak up.”

Outside of working at the hospital, Dinesh is incredibly busy. He is the doctor for the Gold Coast Titans physical disability rugby team and runs a research project in spinal cord injury with a dedicated team of people. He’s also studied law in addition to working as a doctor, and has recently been admitted as a lawyer.

And he is engaged to be married. Dinesh and his fiancé Rachael met working in the emergency department. Rachael is a nurse. They haven’t yet set a date for the wedding.

“We’re just chilling – I figured I made the biggest step now,” Dinesh laughs. 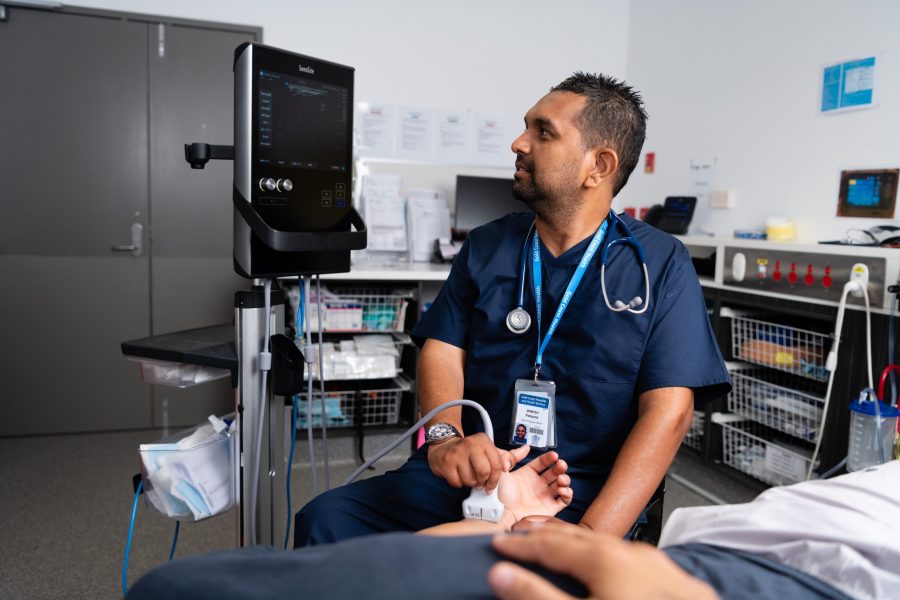